While in the Netherlands last month, my cousin told me pleasant stories of his work-life balance and generous six weeks of paid vacation. Inspired, I decided to not work on my Memex project as much as planned. Instead, I closed my laptop and enjoyed the sights of London, Amsterdam, The Hague, Florence, and Rome.

If you’ve missed reading these newsletters over the last few weeks, I have some good news: the archives are now available online for binge-reading!

Here are a few of my favourites:

I’m also trying out a new service called Buttondown for sending out these emails. It lets me easily convert the markdown content that comes from Bear Writer into a nicely-formatted email. And if you’ve wanted to unsubscribe from this list but felt awkward about emailing me personally to do it, you can now quietly do it with a link at the bottom of this email!

I’m back to the grind this week and the next newsletter should have more technical updates on the project. But for now, here are a few things I did over the last few vacation weeks that were vaguely Memex-related:

If latitude describes how far up or down the planet you are, it’s a pretty easy decision where the 0 line should be: the equator! But longitude describes how far around the planet you are which means an arbitrary starting line has to be picked. The British solved this for the rest of us by setting it to be a line that runs through the imperial capital. The “Prime Meridian” can be visited at the Royal Observatory in Greenwich on a hill overlooking downtown London.

Interestingly, if you pull out your phone to check the GPS coordinates at the Prime Meridian, it’s not quite 0. This is because Greenwich’s meridian is at the astronomical position set to 0 (astronomical longitude) but GPS devices give you your position on a spheroid that approximately models the shape of the earth (geodetic longitude). Programmers, if you think timezones are hard, try to figure out exactly where you are on the planet — you’ll need to account for factors like drift of continents from plate tectonics, mountains warping gravity, the not-perfectly-round shape of the earth, and even special/general relativity.

If you’re wondering what all this is doing in a newsletter about building a Memex, recall the last newsletter where I went over the history of “keeping a log” and its connection to sea navigation. To summarize: ships needed to know how fast they were travelling and a primitive way of calculating this involved throwing a log into the water; these measurements were then compiled into a “logbook”.

I got to see lots of artifacts from early sea navigation at the National Maritime Museum next door to the Greenwich Observatory. Here’s a ship’s logbook and a log reel (you take the triangular part and throw it off the back of a moving ship and count how much line is reeled out): 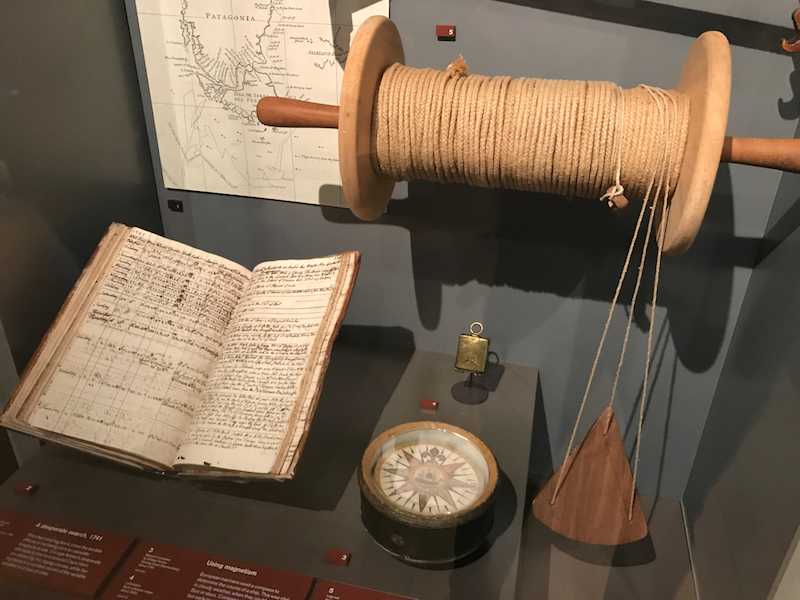 A recurring topic in these newsletters is the politics of personal data. The Glass Room, was a temporary show presented by Mozilla in London that explored this theme:

A “tech store with a twist,” The Glass Room is like a Black Mirror episode come to life, one part art, one part education experience that prods us to confront the relationship between technology, privacy and online security and discover what’s being gained and lost in the mix.

It had the look and feel of an Apple Store but was filled with interactive art pieces instead of shiny devices. There was even an “Ingenius Team” that gave advice on how to manage your personal data.

A few months ago, I wrote about Who Owns the Future, a book that proposes users should get micropayments for the data produced on tech platforms. Manuel Beltrán’s Data Production Labour was an interactive piece based on a similar idea. As you scroll through your facebook timeline on your phone, cameras watch you and categorize your emotional reactions. Here’s the receipt I got for my two minutes of labour:

I also enjoyed James Bridle’s Where the F**k was I?. He put a year’s worth of geolocation data from his iPhone into a book, one day per page. He talks about how this data is a view of your life from a machine’s point of view and seeing this perspective is a breach of a boundary:

This is an atlas, then, made by that other nature, seen through other eyes. But those eyes have been following me, unseen and without permission, and thus I consider provoking breach a necessary act.

A few days after visiting, I was talking about this with a friend and to paraphrase his take, “controlling your personal data is an ideology, not a feature.” As I build my Memex and work on launching it as an app for others, I have to remind myself that products need to solve problems — simply fulfilling an aesthetic about data ownership isn’t enough. Or to put it another way, giving users full control over their personal data is a necessary but not sufficient condition for success.

The Glass Room was in New York City last year and just wrapped up in London. If it ever comes to a city near you, make sure to visit!

Also in London, I gave a talk at the local Quantified Self meetup. I went over how I started my project as a quantified self project but what I was doing only became useful after I started combining it with other types and sources of data. The slides are available here (20MB).

And now, back to the grind!