Not content with having just one unbuilt device, Vannevar Bush imagined a whole set of future versions of the Memex.

In 1959, fourteen years after the first Memex essay was published, Bush had wrapped up most of his many jobs and had some time to once again think of the device. Speaking of the original, he writes:

The object was not to propose a practical device, but to try to take a long look ahead. The time has come to try it again.

In an unpublished essay called Memex II, he surveys technological changes since 1945 and imagines what an updated version of the Memex might be like.

Bush was obsessed with the idea of creating a device that operated like the human brain. A big part of that was a high-capacity storage system which Bush originally solved with microfilm. But now, magnetic tape could do the job but wouldn’t it be even cooler if a future Memex could use crystals?

A cubic single crystal would be made up of rather large and complex molecules, probably organic in nature. […] By such a method, even allowing for very large molecules, storage of information could be made more compact, even, than in the brain itself, and the brain, which contains some ten billion cells, is capable of storing all the scenes one sees, and all that one hears, through a long lifetime.

Bush also wanted the Memex to mirror the human mind by letting users create arbitrary links between data and let users navigate through these networks (“associative trails”, he called them). In Memex II, Bush speculated that the task of creating links could be automated:

This sounds like a complicated performance, and it is, so complicated that it would take a corps of human computers months to carry it out, but the machine can do several such reviews when left by itself overnight, and be ready to report in the morning. […] In much the same way it can explore and recommend the alteration of trails. Given an arbitrary set of data, it can follow a dozen related trails and gather weights, thus occasionally locating cases in unexpected places which should be tied in.

Looking further into the future, Bush imagined what a “Memex III” might be like. If pushing buttons and moving levers was too tedious, Bush said a future Memex might be able to be controlled directly by the mind:

Memex III may respond without this crudity of involving nerve systems which have no real part in cerebration. But this will have to wait until the psychologists and neurologists know far more than they do now, and until the advent of devices and instruments, of which the encephlograph [sic] is only a faint beginning, which can sense the activity of a brain without interfering with its action.

As human minds shape the design of the Memex, could the Memex reshape the human mind? Bush imagined a co-evolution process giving humans new senses (~ESP) which would let us be able to directly communicate with the device.

As wild as some of the ideas that Bush had for the Memex, there’s still a reason I’m drawn to the device:

The phrase appears over and over again, a "personal machine" designed to fit in with a person's daily thoughts, entirely unlike "the enormous computers which serve whole companies." This interest in a personal machine separated Bush from those who worked with and wrote about digital computers at the time. The idea of a personal computer to support and augment individual work and thought had no present examples and no champion.

In Bush’s later years, he recognized that he was not on the bleeding edge of technology anymore but still still very strongly about the importance of a device to help individuals. But:

At the end of Bush's life, Memex remained what it had been in the 1930s, "the idea of a machine."

(The last two quotes are from a great paper called The Idea of a Machine: The Later Memex Essays by James M. Nyce and Paul Kahn which goes over Bush’s later writings on the Memex. It’s published in From Memex to Hypertext) along with the Memex II essay.)

Hello friends, it’s been a while! Travelling and conferences have brought newsletter production to a halt. But I’ve got to do fun things like give a Memex demo at RailsConf, speak to librarians and archivists at the Personal Digital Archiving Conference, and talk about my personal chatbots at !!con (more on this later when the conference video comes out). Another talk:

I got to speak at ITP last month in New York.

ITP is a graduate department described as an art school for engineers or an engineering school for artists. Perhaps the best way to describe us is a Center for the Recently Possible.

In addition to telling the story of the historical Memex and showing a demo of my version, I wanted to go over artists doing interesting work based on personal data:

Conceptual artist Katie Lewis devises elaborate methods of recording data about herself, be it sensations felt by various body parts or other other aspects of life’s minutiae plotted over time using littlemore than pins, thread and pencil marked dates. The artworks themselves are abstracted from their actual purpose, and only the organic forms representing the accumulation data over time are left.

More of her work.

Eric Boam, mentioned previously, has a new report out: “A Year in Lyrics”.

I took the entire history of my music listening for the year and then aggregated the lyrics to those songs. The lyrical corpus was then analyzed a number of different ways to look at things like pronouns, syllables, reading level, geographical references, and common words. This project is a visual summary of that analysis. 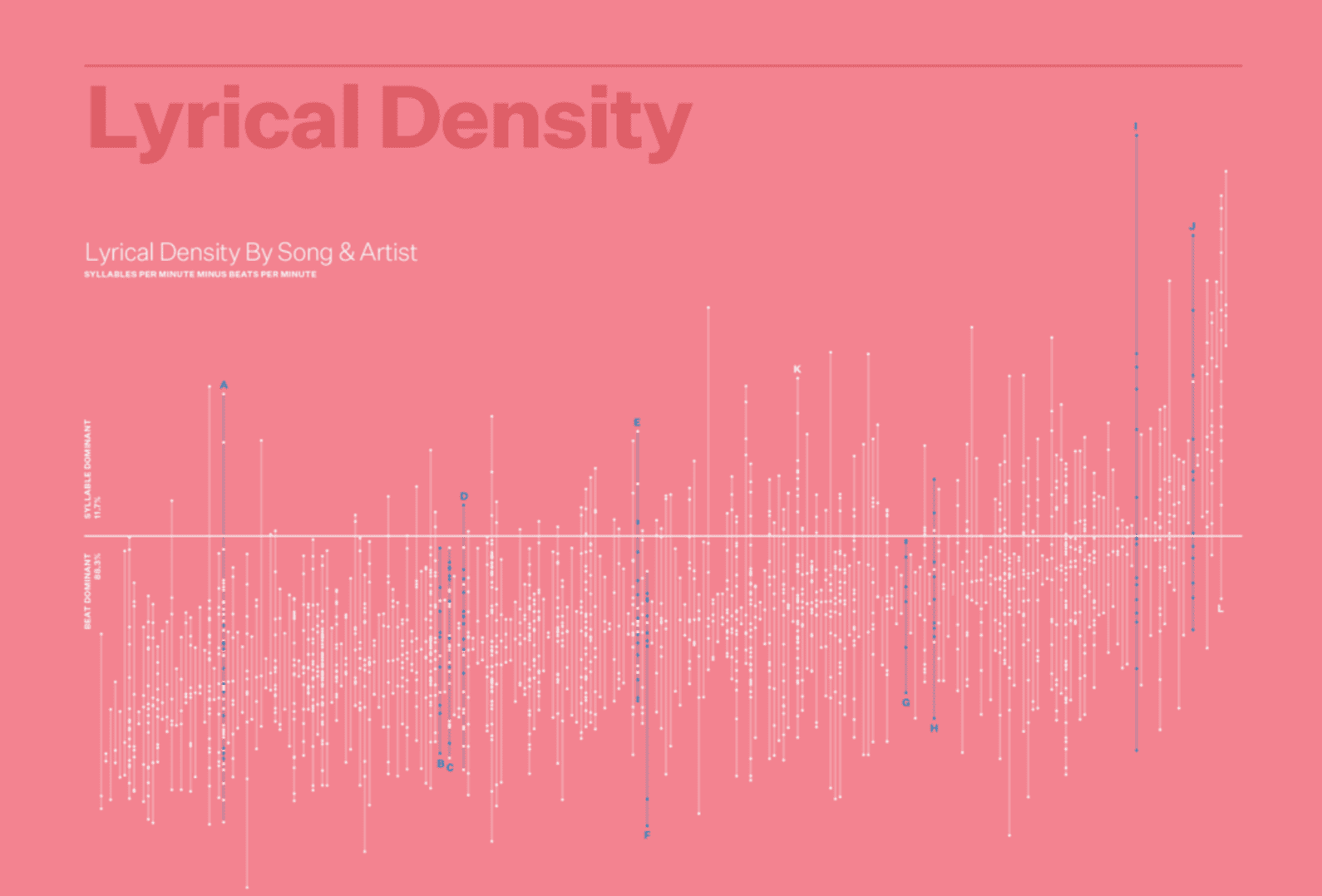 Laurie Frick, also mentioned previously, has a portfolio full of quantified-self-based artwork. A statement from her home page:

If you come across anyone making art based on personal history, send it my way!

I put on my own artist hat

In a newsletter from last year, I talked about a book of poetry that decontextualized text in an interesting way. Inspired by this (and wanting to show ITP people that I too could be artistic), I whipped up a quick project that takes a search term and looks for matches in my own message history, and lines up the output with only a bit of context showing.

People doing these sorts of projects often end up spending the majority of their efforts on extracting and cleaning up the data. Having all my history parsed and organized in a single database lets me crank out a project like this with minimal effort (I was able to do this on a short plane ride).

There are two broad trends in tech that affect my project that are playing out against each other.

The first is a retrenchment of the open web and platforms that offer access through APIs. A few weeks ago, Instagram removed most of their API with no warning. Youtube removed the watching history endpoint with no explanation. Facebook and Twitter almost never launch features with API access anymore. Often these changes are framed as privacy improvements or responses to Cambridge Analytica but they’re as much about creating moats to protect their most valuable asset: user data. #webwelost

Playing against that is a growing expectation that users should have a right to download their digital history and GDPR even makes machine-readable exporting a requirement. Google’s takeout functionality has always been excellent but recently, Facebook and Instagram also launched comprehensive export features.

Over the last few weeks, I’ve been working on importers that take advantage of these new export formats. A challenge for the Memex as a product is that few people will have obsessively saved as much data as me and the system will provide little value until enough data has been accumulated. Being able to backfill history through these giant zip files will help make the Memex valuable to users right away. But it’s not perfect — generating these exports is a tedious manual process and they leave out a lot of important metadata.

If Canada or the US ever create their own version of GDPR legislation, I’d love to see a rule more along the lines of a right to a “personal access token” as tweeted by Garry Tan.

Any system with 1 million+ users should by law be required to issue users with personal API keys. https://t.co/vLkchnCQpx

This post was published on June 4, 2018 in Memex. It is tagged with: history, memex, Vannevar Bush.