Perhaps the luckiest thing to happen to the Memex was that it remained imaginary. Pesky implementation details never had to be worked out, no business model had to be proved, and and no users were left unsatisfied.

The Memex is an untarnished vision of what computers should be able to do for us. This week, I came across a great brochure from 1987 (via) for one such conceptual descendant of the Memex, Apple’s Hypercard: 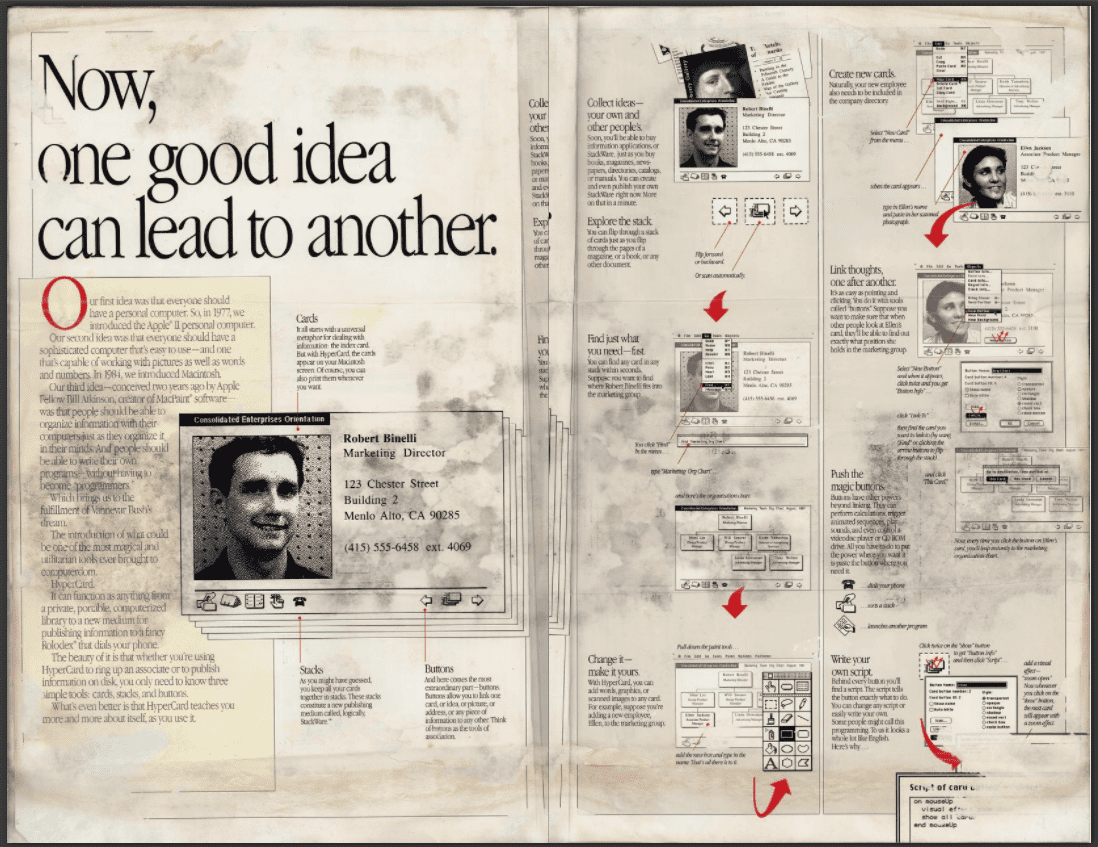 Apple reminds us that they’ve already achieved their first two goals: personal computing for everyone (the Apple II) and an easy-to-use computer (the Macintosh). The launch of Hypercard would achieve their next goal of letting everyone organize and interact with their own information.

The Hypercard is the “fulfillment of Vannevar Bush’s dream,” Apple confidently tells us. The brochure talks about the history of the Memex and Bush’s ideas about associative memory and traversing information through a web of links. HyperCard was a bold, inspirational system and the brochure is a great read (and also an example of the lost art of print ad copywriting).

In 1991, researcher Linda Smith went over the hundreds of citations of the original Memex essay since its publication in 1945:

In each decade since the Memex design was published, commentators have not only lauded it as vision, but also asserted that ‘technology [has] finally caught up with this vision’

The Memex, she argues, acts as an “image of potentiality,” an idea that’s explored further in Belinda Barnet’s book Memory Machines which is worth a read if you want a cultural angle on the history of hypertext.

HyperCard is but one of many projects that claim lineage to the Memex. Attempts to construct the Memex family tree can go to absurd lengths like this chart called the “Bushy Tree” (get it??) 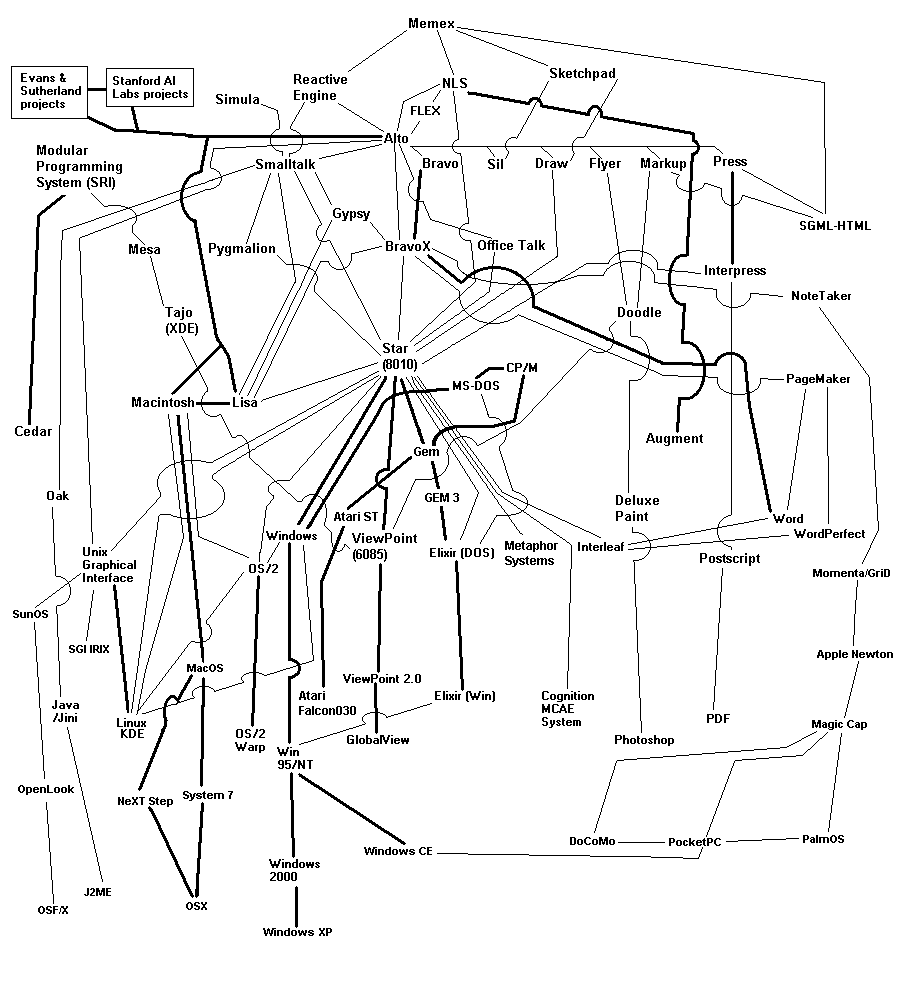 Last week, I got to introduce a large group of software professionals about my leaf on the Memex family tree.

I was in St. Louis for Strange Loop (welcome, new subscribers!) and I gave a lightning talk going over the history of the Memex, my implementation of one, and a few specifics about how I modelled data with event sourcing. The slides are available here (11MB pdf).

The Strange Loop schedule had up to 8 simultaneous and was thus a constant source of FOMO but I had a blast and I would definitely attend again. Some talks I enjoyed:

Almost as enjoyable as attending the conference was the three-day drive that Max and I did to get to St. Louis. Memories we’ll remember: 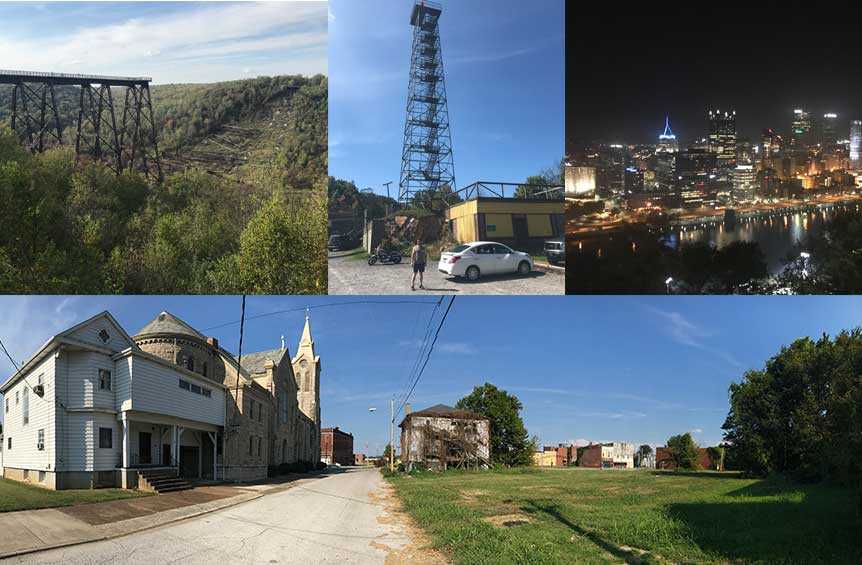 My Memex is both a great way to time-travel back to these memories or plan new trips. Some examples:

Every now and then, I lull myself into believing that my work on building third-party importers for my Memex is nearing completion. This delusion was most recently smashed this when my ebook reader app stopped working last week.

Gerty was exactly what I wanted in a mobile ebook reader: it was an elegant app for reading epub files and most importantly, it saved reading sessions and annotations to Dropbox which meant I could easily consume the data for my Memex. Dropbox deprecated their v1 API last week and it broke lots of apps including my beloved Gerty.

Marvin (by the same developer) is the best ebook reader for iOS but it only exposes personal data through manual exports so I avoided using it. My reading data is some of my most most useful in my Memex so I reluctantly switched this week and scrambled to build a new importer. My reading activity is flowing in once again! 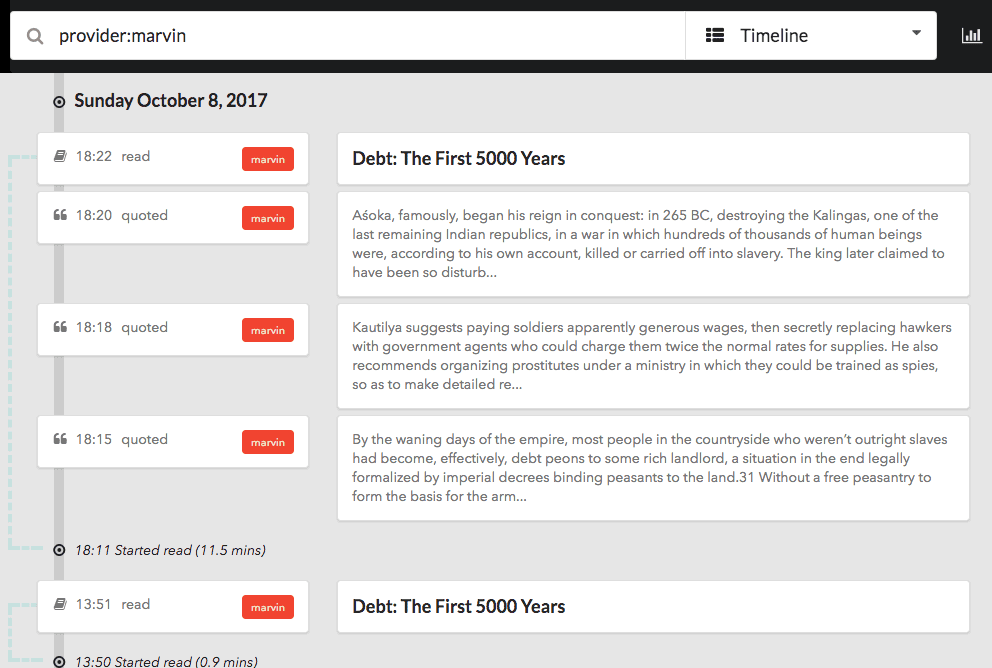 It reinforced to me, yet again, that we can’t rely on anyone else to provide long-term access to our personal data.

I’m back in the coding groove this week. Most of my focus will be on improving the app’s onboarding flows and refactoring a few specific things that will be much harder to fix once there are more installations.

A quick summary for new subscribers:

If you want to be a guinea pig and have the time to be walked through the installation, send me a message.

This post was published on October 8, 2017 in Memex. It is tagged with: history, memex.