Spotify finally secured the streaming rights to Prince’s music in February. When he was alive, Prince was an artist who always attempted to own the means of production/distribution and is likely rolling in his grave. Personally however, it means I was able to easily listen to his music again after a long break. I like being able to check my graphs to quickly confirm these sorts of things:

Phill also used his graphs to confirm a spike in StackOverflow visits after agreeing to do a quick “two hour job” for his partner involving Visual Basic scripting.

I continued to work on the d3 force diagram this week. I refactored the component to be able to display arbitrary graph segments from a query result. The query endpoint returns a set of nested JSON objects, they get converted by Ember into models/relationships, and the d3 component traverses through these objects using the eachRelationship() method. I’m pretty proud of this component, both as a neat use of Ember Data and because it’s a good way to visualize the structure and breadth of my dataset. One issue I still have to work on is avoiding cycles in the graph; I had to hardcode a set of edge types so inverse relationships would get ignored, thus avoiding infinite loops (a post is contained in a thread which contains a post which is contained in a thread, ad infinitum).

I continue to thrash on a direction for improving the querying interface. In particular, I need users to be able to build search queries and traversals and configure how the results are displayed (as a timeline, table, graph, etc). Much time has been spent trawling Dribbble and sketching on paper but I don’t feel I have a clear path forward on this so not much to report.

The path to an OSX app

I played around with sqlite this week to figure out if it might work well as the master database for an OSX-based version of the app (as opposed to rails API in the cloud). I set up a mix of sample data (including some very clever posts from the ‘tweeter’ service generated by the Faker gem) and some slices of real data. 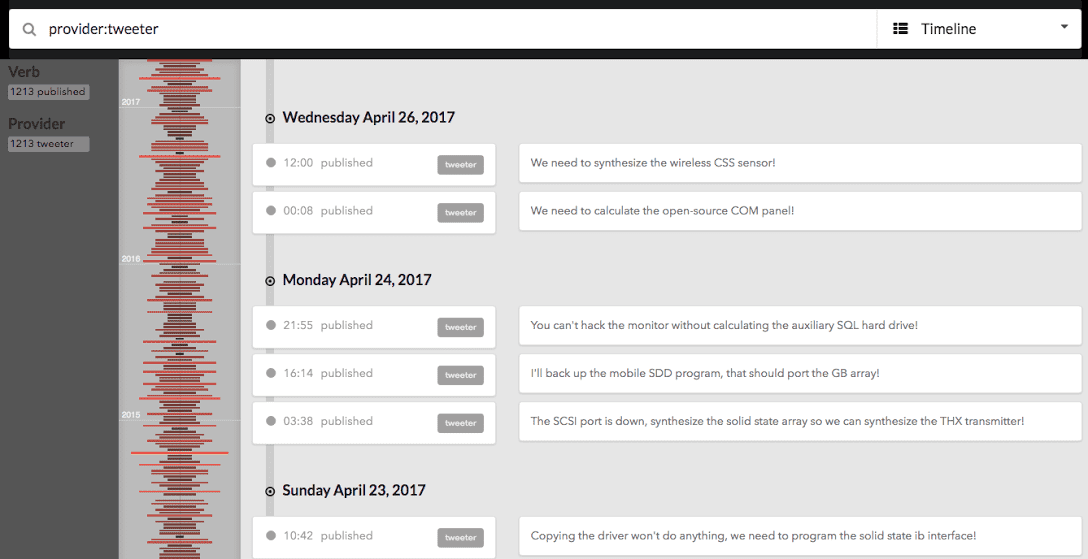 I also nerdsniped Max who figured out how to package postgres into an electron app. But even without an API server and the ETL scripts, the app clocks in at 500mb. The query endpoint isn’t too complicated and I feel I could rewrite it in Node and the ETL scripts could probably written in golang but I don’t have much (err, any) experience in either so I might try to package the current rails app before I venture to riskier technical ventures.

Isaac set up a special edition of the Ember meetup group ( https://www.meetup.com/EmberJS-NYC/events/239541566/ ) and we’re both going to do half hour talks.

Things I want to include in my demo:

Things I need to do before the demo: get hyfen.net updated and publish a subpage for this project, making sure it has an email collector